It is entirely possible that I have spoiled my dogs, just a bit.

But allow me to become defensive for a moment. These are dogs, not children. They are not expected to eventually deal with real-world burdens such as maintaining proper tire pressure, paying a mortgage, or landing a scholarship to a tier 2 school, even though they are bright enough for tier 1. And despite being spoiled, I guarantee that they will never have meltdowns in Walmart that land them as unwitting YouTube stars. But they  do often get what they want and there doesn’t seem to be much work behind it.

Allow me also to back up just a bit. Sophie, the older and more spoiled of the two is a doll. She loves people and other dogs when they give her a chance, wiggling and happy-dancing her way into their hearts. But she won’t walk at heal unless there is something in it for her, and that something can only be a non-stop stream of treats. Otherwise you need to hang on and talk to the tail. She started this long before my ex and I saved her from dog shelter life and, despite our admittedly mediocre efforts, she has continued it. Go figure.

She has her good points, of course. She doesn’t run away. She was once literally attacked by two little dogs running out of a house and did not fight back despite getting bitten. She is incredibly attuned to others’ emotions and served as a comfort dog to everyone at an election night party that turned sad around 8pm. She behaves wonderfully in the car. She counter surfs only when you give her no other choice. She loves going to the vet. The vet!  But walking at heal just doesn’t happen for her.

Rufus, on the other hand, is the bizarro-world version of Sophie. He’ll walk at heal, but he is wary of other people so much that he barks at them like a Facebook user arguing with a politically-minded opponent in all caps. He annoys other dogs and cannot read the signs that they may not want to play. He gets car sick a lot. He has chewed some of my belongings but not consistently enough for me to say, “shoes can stay out but hats must go in the closet.”

He is a love-bug, of course and follows me from room to room. His double-paw pounces on his toys happen with an exuberance that only a crusty, hard-hearted grouch would scowl at. And he is whip-smart and learns very quickly.

They definitely enjoy one another’s company – although Sophie does need an occasional break from the year-old-puppy trying to put her whole head in his mouth. Ultimately they recognize that they are a team: they do not resource guard and respect the other’s food boundaries.

At the same time, I realize that they have trained me well.

Now they do have a few habits that need breaking. Sophie is repeatedly scolded for begging when people eat. Rufus has decided that taking tissue out of the Kleenex box is fun. Sophie often refuses to move in the back yard when I call for her  to come in, only to stand at the door two minutes later. Rufus thinks Sophie makes a good pillow to sit on.

I am picking my battles. While some of these behaviors may make my parents’ eyes roll, I’m at ease with most of them. My biggest challenges are easing Rufus’ anxiety with new people and keeping Sophie’s weight down. This means she does not get so many treats while Rufus gets loads when meeting new people. This results in Sophie possibly feeling that life is not fair. Or maybe not. She is a dog, and the love of her life is food.

This is where the comparison to real, human children can occur. Like so many parents I want to provide a safe and healthy existence for my two dependents. I don’t want them to be uncomfortable but like every living thing on the planet must know, discomfort cannot be completely avoided . Boundaries must be enforced, but so must my sanity. If I’m near the door, I can open and close it without even thinking about it too much. If I’m in another room, they’re out of luck. If the weather is below freezing, I’m happy to have dogs on the bed. If we’re downstairs because it’s too stiflingly hot in the bedroom, they’re sleeping on the floor. So far, so good.

Dogs are easier than kids, plain and simple. They may make as much of a mess, eat you out of house and home, and fart like the cowboys from Blazing Saddles. Health scares and vet bills and chewed shoes and carpet stains may increase. But the love is never tested or questioned. Simple human failings are not devastating. Forgiveness is easy – well, easier – and hope is never, even flickeringly, abandoned. 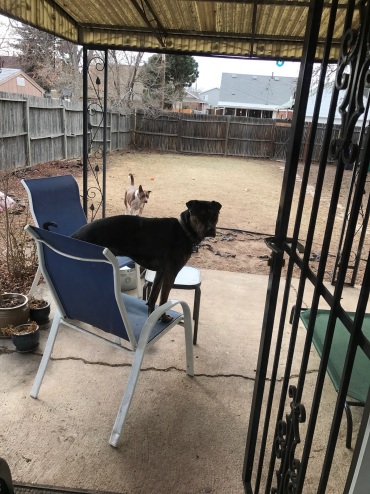